Have You Seen These Weird Buildings Before? - Eurolink 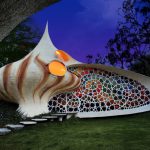 Have You Seen These Weird Buildings Before?

Would you send your children to nursery in a giant cat? Or stay the night in a hotel that looks like a giant basket?

Buildings are enduring symbols of art and creativity. From the Colosseum to the Great Wall of China, great buildings usually have a huge impact on people. We’ve handpicked 10 fantastic places of wonder that will make you question how do they even exist.

This fairy tale inspired, warped building houses restaurants, shops, and a radio station. Built in 2004 by the design team of Szotynscy & Zaleski, it is part of the Rezydent shopping centre.

Inspiration for the unusually shaped building came from Polish fairy tale illistrations by Jan Marcin Szancer and Pen Dahlberg. Appearing almost as though warped in Photoshop, tourists are often hesitant to walk through the vertigo-inducing entrance. The local name of the building is Krzywy Domek which means ‘Crooked House’.

This fantastical house shaped like a seashell was designed by Javier Senosiain of Senosiain Arquitectos, a celebrated Mexican architect, for a young family tired of their conventional home that yearned to live in something a little more integrated with nature.

Using a technique called ferrocement construction, a frame of steel-enforced chicken wire is coated with concrete, allowing for rounded, natural curves, the inside is full of spirals, circles, and organically shaped rooms that mimic the concave chambers one would expect inside a giant mollusk shell. Hundreds of small rainbow-coloured stained-glass windows line spaces of ceiling and walls alike.

The Cube Houses in Rotterdam are one of the city’s most iconic attractions. Designed by Dutch architect Piet Blom in the late 1970s, this residential development stands apart as its homes are literally cubes, tilted 45 degrees on their sides, optimised to make the most of the available space. The result is buildings that look, feel and behave, unlike anything you’ll find elsewhere in the world.

The Cube Houses were designed asymmetrically to resemble an abstract forest, each triangular roof representing a treetop. The residences were constructed on concrete pillars with wooden framing. Standing at three-floors tall, the ground floor is the entrance, the first floor contains an open kitchen and living room, the second floor houses a bathroom and two bedrooms, and in some cases, the top floor is used as a small rooftop garden.

Curious visitors can explore the Cube House Show Room which has been converted into a museum in recognition of its unique and eye-catching architecture.

The Big Basket, which opened in 1997, was built as the headquarters of the Longaberger Company, an American manufacturer of handcrafted maple wood baskets and other lifestyle products, which closed its doors in 2018. It is a scaled-up version of Longaberger’s signature Medium Market Basket. According to Jim Klein, a former president of the company, most of the cherry wood used in the Big Basket came from the grounds of the Longaberger Golf Club in Hanover. The building also boasts two enormous handles, heated during the winter to thaw the ice.

The Big Basket is scheduled to reopen this year as a luxury hotel. The co-owners, Bobby George and Steve Coon, of coon Restoration & Sealants, plan to renovate the interior. Architects will have to get creative in adapting the Basket’s long windows, which appear between the gaps of its seemingly woven exterior. ‘If you make them in hotel rooms, you’re going to need to put two rooms per window,’ Barrett says. But the new owners say that the Basket will live on. ‘This will stay a basket,’ Coon said. ‘It’s going to be a basket forever.’

The kids who attend nursery and pre-school in Karlsruhe, Germany, do so in a whimsical giant cat.

Constructed in 2011 and designed by Tomi Ungerer and Ayla Suzan Yöndel, the cat building includes a door for a month below a whisker-lined nose, windows for eyes, and a classroom in its belly. For added fun, kids can ride down its tail which doubles as a slide.

Sandwiched improbably between two boulders in the midst of the majestic Portuguese countryside, the Stone House is a wonder. A Portuguese engineer from Guimarães was inspired to build a house in the Fafe Mountains to serve as a place for recreation in the countryside. The construction of the Stone House began in 1972 and was completed two years later, in 1974.

Each room in the Stone House has a different shape, probably due to the boulders that form the walls of the house. There is also a fireplace to keep it warm during the cold winters and a sofa made of concrete and eucalyptus wood. Interestingly, the Stone House does not have a direct electricity supply, even though it is situated not far from a wind farm.

Zaandam is known for its charming and iconic green cottages. They just aren’t usually stacked 11 stories high to make one gigantic hotel that many have deemed and architectural monstrosity.

Inspired by the small cottages of the region and Claude Monet’s painting of the blue house of Zaandam, architect Wilfried van Winden set about creating a hotel that was both futuristic and retro simultaneously. Complete with 160 rooms, Turkish baths, a bar, and a swimming pool, Winden’s masterpiece has all the regular amenities of a hotel. Yet its design manages to allude to the idea that there is no place like home.

Altogether, the exterior features nearly 70 cottage facades, each with a varied shade of green and different window layout. Topped off with a red-orange roof, the stacked-cottage Inntel Hotel is one of the first parts of a revitalization campaign in the city, aimed at restoring its buildings without losing the charm of the town’s trademark architecture.

Rising 244 feet above the streets of Reykjavik is Hallgrimskirkja. The building is situated in the capital city’s centre and has become one of its best-known symbols.

The Lutheran church has a stylized concrete exterior inspired by the distinctive basalt formations found throughout Iceland. Although construction began in 1945, the church took 38 years to build and many parts of it were consecrated and in use at different times. The bell tower, which is accessible via an elevator, offers the best views in the city.

Besides its stunning exterior, its most famous feature inside is a huge organ that was built in Germany in 1992, boasting 5,275 pipes. It is 15 meters tall and weighs 25 tons.

Sprouting as a symbol of beauty and togetherness, the Bahá’í Lotus Temple welcomes all religions and people to worship. The pristine white petals of the temple are meant to symbolize folding man and nature into a wholesome oneness. The lotus flower has a special significance in Asian culture, representing clarity and spirituality. Nine blue ponds surround the unfolding blossoms.

Since its completion in 1986, The Lotus Temple has seen 70 million visitors and is said to be more frequented than the Eiffel Tower and Taj Mahal. Visitors can approach the Temple to one of its nine entrances, passing by lush blue-green pools and pristine walkways.

The Austrian artist and architect Friedensreich Hundertwasser is said to have once called straight lines ‘the devil’s tool’.

Waldspirale translates to ‘wooded spiral’ and that is exactly what it is. The large spiraled building is topped with an incredible forest – beech, maple and lime trees grow on the undulating, twisting roof. Completed in 2000, the Waldpirale has 105 apartments and more than 1000 windows. None of these are shaped the same and many have trees growing right through them.

The Waldspirale was the last of Hundertwasser’s creations. He died in 2000, aboard the RMS Queen Mary 2 en route to Germany from Australia to view the work.