Did You Know These Multi-Billion Dollar Companies Started In A Garage? - Eurolink
close

How Much Time And Money Is Wasted On Viewing No Shows? 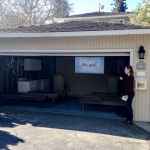 Did You Know These Multi-Billion Dollar Companies Started In A Garage?

Do you think you need a corporate office to start a business? Think again. Some of the largest and most successful companies around started in the unlikeliest of places – someone’s garage. These humble beginnings teach us that the most amazing ideas have no boundaries. From small, rented garages to multibillion-dollar companies, anyone who’s passionate about an idea can start and develop that idea anywhere, as long as they have a little privacy and room to shut out the rest of the world.

Four years after being named the youngest vice president of a successful Wall Street investment firm, Jeff Bezos quit his job and moved to Seattle to pursue what he believed to be untapped online retailing opportunities in the book industry. In 1994 he set up shop in his garage in Bellevue Washington and began developing software.

Because he couldn’t have meetings in a garage, he held them at a nearby Barnes & Noble, where most of Amazon’s first contracts were negotiated. In July 1995, Bezos launched Amazon.com and sold his first book.

The website grew exponentially over the next few years, and Bezos took Amazon public in 1997. It’s IPO raised an amazing $54 million on the NASDAQ exchange.

From the very beginning, Bezos knew amazon would eventually sell other products online; not just books. And so, 1998, Amazon.com began to sell computer games and music through its online store.

At around the same time, it also began to expand globally. Today Amazon is one of the largest online retailers in the world valued at almost $300 billion making Bezos one of the richest men in the world.

Probably one of the most famous companies that started in a garage, Larry Page and Sergey Brin established Google’s headquarters in Susan Wojcicki’s garage in September 1998. At the time, Wojciki – who held a senior vice president position at Google until January 2014 and is now YouTube’s CEO – was a recent business school graduate and rented out her garage to the Google guys for $1700 a month in order to make her mortgage payments.

Within one year, the Google team outgrew the garage space and moved to an office in Palo Alto along with their 8 employees. Page and Brin tried to sell Google to Excite for $1 million, but the company rejected the offer. What started as a college project, today is the undisputed behemoth of the internet worth over $500 billion.

Apple is one of the most valuable and well-known brands today, so it’s often surprising when people find out that Apple’s first computers were built in a small garage in Cupertino, California.

In 1976, Steve Wozniak designer the first apple computer. He then joined forces with late Steve Jobs and another partner, Ronald Wayne, to launch Apple Computer Co, from Jobs’ adopted parents’ garage. One of their first orders was from a local retailer who ordered 50 computers at $500 each. Wayne had already abandoned the business but Jobs and Wozniak managed to build the computers in just 30 days.

Today, Apple is the world leader in technology and is worth over $550 billion. The swanky company office called Infinite Loop is still based in Cupertino and the Silicon Valley home where Jobs grew up is listed as one of the city’s historic properties.

When Bill Gates and Paul Allen started Microsoft, all they had to work with was a garage and very little resources. Using their programming skills, they built their first operating system and licensed it for $80,000. Windows was born a few years later. Today, Microsoft is worth over $400 billion making Bill Gates the richest man on the planet.

The Walt Disney Co. is the highest-grossing media conglomerate in the world worth over $150 billion, and its first film studio was at Walt Disney’s uncle’s one car garage. It all began in the summer of 1923. At the time the company was called The Disney Brothers Studio and was based about 45 minutes away from today’s Disneyland Park in Anaheim, California. In that small space, the team filmed the Alice Comedies, which would later inspire Disney’s version of Alice in Wonderland.

A few months later, Disney, along with his brother Roy, moved to a bigger lot down the street from their uncle’s house, which is where Disney signed a deal with Universal Studios to distribute Alice Comedies. And the rest is animation history.

The world’s first Harley was built in a wooden shed in Milwaukee, Wisconsin by 20-year-old William Harley who always wanted to design motorcycle. This first prototype was actually a small motor for a bicycle that he designed and built over the next two years with his childhood friend Arthur Davidson. It didn’t take long for Harley and Davidson to expand into this market. They officially founded their company in 1903 and have since solidified their names as producers of high-quality, high-octane American motorbikes.

Just 10 miles from the garage where Apple was started, Stanford graduates Bill Hewlett and Dave Packard launched their own company focused on building a variety of electrical devices, Hewlett-Packard Co. (HP), in 1939 with an investment of only $538. Now known for their manufacturing of personal computers, software and computing accessories, their roots lie in niche technological innovations of all sorts. These included agricultural products, high-tech audio engineering equipment and other test equipment.

In the garage in the back of the house they were renting in Palo Alto, California, Hewlett and Packard managed to streamline the technology built into an audio oscillator, allowing them to sell their first product for the fraction of the price of their competitors. One of HP’s first clients was Walt Disney Productions, which bought eight audio oscillators to use for certifying the surround sound systems installed in theatres for their motion picture Fantasia.

The garage was used as a research lab, development workshop and manufacturing facility for nearly a year before the partners outgrew it and moved to roomier quarters nearby. The company was incorporated in 1947 and, 10 years after that, became public. Today the company is worth about $13 billion and Packard’s garage is a private museum known as the ‘birthplace of Silicon Valley.’

Mattel, whose most famous product is the Babie doll, was founded by Harold ‘Matt’ Matson and Ruth and Elliot Handler in 1945. Before the company became THE American toy manufacturing company, the business partners were making picture frames out of a Southern California garage. Elliot started making dollhouse furniture from the leftover materials of the picture frames. Ruth, who worked at Paramount Pictures, is said to have landed her husband’s first order by bringing a suitcase full of the dollhouse furniture to a store in Wilshire Boulevard not far from her job.

The success of the dollhouse furniture pushed Elliot and Ruth (Matson had left the company due to poor health) to focus solely on toy manufacturing. And in 1959, Ruth invented the Barbie doll, named after her daughter Barbara.

Today, they are the largest toy-making company in the world today and are worth $10 billion.

Michael Dell built his first computer in a garage. In 1984, he started designing customised computers for people. Almost a year later, he decided to drop out of college to expand his business which had turn profitable in its first year. Today, Dell is one of the strongest competitors in the computer manufacturing market worth over $50 billion.

If you think a garage is too small a space to start a billion-dollar business, get this, Nike started in the boot of a car in 1964 as Blue Ribbon Sports. Phil Knight made shoes, and his coach at the University of Oregon, Bill Bowerman tested them on runners. For the first 2 years, it couldn’t even find any retailers. Today, Nike is the biggest manufacturer of sports apparel and accessories worth about $90 billion.